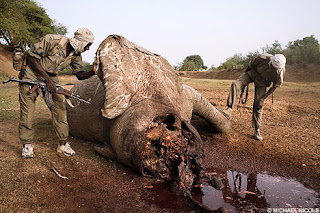 I don't think that thousands of elephants should die just because people are being selfish and are killing them just for they're tusk.
I think that killing elephants are wrong and over a thousand elephants die a year. Also there is a reserve in Zakouma that if the elephant leaves the reserve it is free for a hunters and pochers to kill them. Also if someone tries to kill the elephants while in the reserve then the "Rangers" will prosecute or kill the trouble maker. In Zakouma  that is one the only places you can see hundreds of elephants move in herds. Personally I don't think that people should kill elephants just for there tusk and  I think that we should build more reserves to protect these species from being extinct
Posted by jmohamed188 at 9:55 AM